A collaboration work between Vent Box Productions and Sepsis Records. We will be holding a gig this 27th September 2014. Kicking off Part I, we have Down For Life and A.L.I.C.E from Indonesia. Both bands appeared in the recent Hammersonic Festival 2014.

Down For Life Bio:

"Started with an enthusiastic act for Heavy Music, Down For Life was formed in early 2000’. Some Individual involved on this used to play in other bands such as Sabotage, Apoticore, Full Stricken, and Underdog, thus Down For Life was born.

Stephanus Adjie (Vocal) with Anang Farid aka Achenk (ex Guitar) formed Down For Life, they started gathering some friends, that was when Achmad Azhari aka Jojo (Bass) and Imam Santoso (Drum) came in and started the first history of Down For Life. On the debut act, Down For Life was still influenced by NYHC band such as Madball,etc. but then, Achenk got to call it quits, and Doddy PDD filled in the guitar, DFL went back to the basic roots of Metal. Basically Down For Life is a hardcore band playing Metal music, which we called Metalcore.

After several years, Doddy decided to resign from the band, and at that moment, Wahyu Jayadi joined DFL on the drum throne. From this formation, born the debut album “Simfoni Kebisingan Babi Neraka” during May 2008, nothing but a great success came from this debut album. Boar is the term for one of the filthiest creature but yet its so great from the taste of its flesh. that’s the main reason why DFL fanbase and management was called “Hellboar Squad (Pasukan Babi Neraka).

Time goes by , in 2010 Santoso left the band due personal factors, Moses Rizky filled in guitars. From this line up, DFL marked their history for the next album. “Himne Perang Akhir Pekan”, which was released by Sepsis Records in September 2013."

In late 2010, ALICE released an E.P titled “Konsorsium Humaniora”. The release gets a lot of positive response from various media and music enthusiasts in Indonesia and overseas. ALICE did their promo tour in several cities like Jogja, Solo, Jakarta, Bandung, Semarang, Bali and Kuala Lumpur."

This event is proudly presented by Vent Box Productions and Sepsis Records.

Bring lotsa money to buy merchandise from all bands!!! 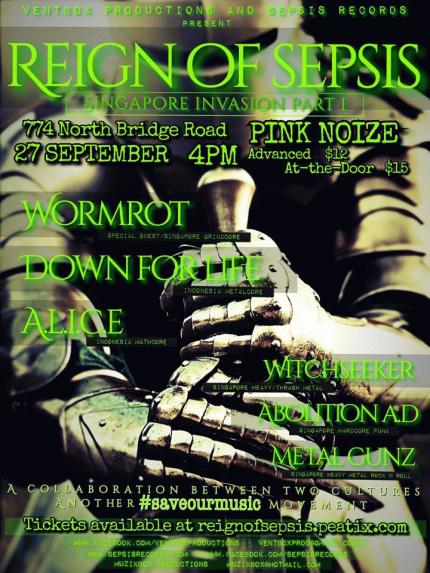